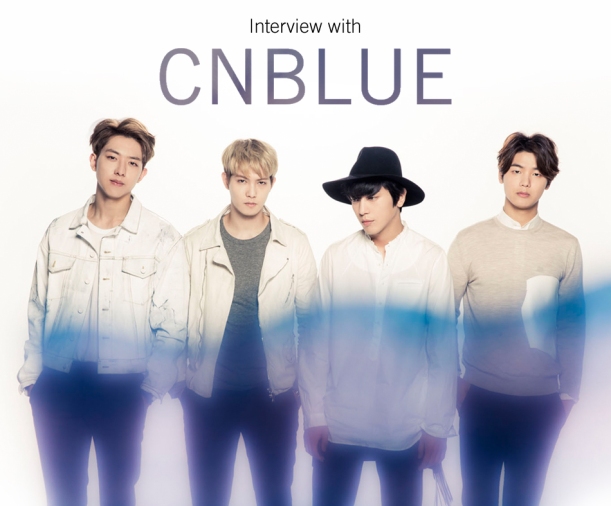 Excite: We were surprised the synthesizer sounds of your latest song ‘WHITE’. This was made by jonghyun, when have you started making this song?

Jonghyun: It was when we had a tour ‘CNBLUE 2014 ARENA TOUR “WAVE”’ last year.. I had also another schedule like “2014 KINGDOM IN JAPAN-STARLIGHT-“,
I thought to want to make fun song. It was the same way to make a song as always, first of all, I play a phrase with a guitar, then tried arrangement with a PC. This song didn’t have strong sounds, but I’ve made more and more strong.

Jonghyun: Yes (Laugh) It might too much though (Laugh). Because there was the theme ‘Color’ this time, we thought it was ‘WHITE’.

Excite: We read the lyric. What does it mean for ‘WHITE’ for you?

Jonghyun: There are the light’s three primary colors, and these colors make white even if we mix them up. But in the case of just random color, if we mix them up, they make black. I think that people come to black thinking more and more.. So the theme is ‘be the light!’

Jungshin: For me, I’ve thought that Jonghyun-hyeong always made ballad song like ‘FOXY’ and ‘ECLIPSE’. I think this time’s ‘WHITE’ is different from our songs so far. So, when I heard beginning of this song first, I felt a little bit weird. But I heard it again and again, I’ve been getting the feeling that this is very good.

Minhyuk: As Jungshin said, because I like ‘Eclipse’, ‘Blind Love’ and ‘Never Too late’ as Jonghyun’s song style, I was surprised when I heard this song and felt that he challenged something new. And because this song has lots of synthesizer sounds, I thought “Actually is it our song?”, but I felt fresh about it.

Yonghwa: I also thought that this was a different song so far. And it’s different from the image as a song of CNBLUE ever too. This is attractive song that has refrain of synthesized sounds.

Jungshin: We expect our fan’s response after they heard this song.

Excite: What kind of charm did you want to add to this song by your own bass guitar play?

Jungshin: I think there is a feeling that Jonghyun-hyeong want to, right? So, I played my bass guitar along with it.

Minhyuk: When I was recording, I tried to play along the song. But We’ll arrange it after recording, so I stopped wondering if I play fit with the song or not. I think I play with freedom. Recently, I play drums
by my feeling.

Excite: The feeling that you want to try to be honest to my own feeling is getting more and more?

Minhyuk: I can say Yes.

Excite: The members talked about this song that surprised us, but this is just as your think?

Jonghyun: I think when fans heard this song, they would be surprised.

Excite: Have you thought that you wanted to try to surprise fans?

Jonghyun: I haven’t had that feeling before. But I have got it more and more.

Excite: Your latest album ‘WAVE’ was the work that showed your sound improvement. This time, do you want to show more changes or improvement in this single CD?

Jonghyun: Well… Actually, I haven’t thought deeply as same as other members. We have had 10 years experiences after starting to play instruments, so I think this change happened naturally. Even except the music, everyone is getting more and more improve while they are practicing. I can say the experience is important.

Minhyuk: I think so.

Jungshin: I think we leave our change to take its own course. We don’t want change on purpose, but let them improve with the passage of time Of course, we might try to something change meaningly. We didn’t think that we have to change this time.

Minhyuk: We surely have improved, but we don’t have some greed to dare to improve. I just did what I felt.

Excite: You just finished to take your MV for this song (*We interviewed them in Feb). We heard that a mystery man will appear in the MV. How was about taking the MV with him?

Yonghwa:… well, he is a strange man.

Jonghyun: absolutely. He was dancing till the end (Laugh). He is really barrel of laughs.

Jungshin: We have had a heroine or ourselves in our MV ever, but this time there were Mr. WHITE. It made us feel different feelings.

Yonghwa: We don’t watch that MV yet, but I impressed about the lighting that was really beautiful.

Excite: Yonghwa’s solo album have released in March and the other members have appeared drama. All of you participate actively in solo. Has something changed about the position of the band CNBLUE in your mind?

Jungshin: I think CNBLUE is such an another family for me. I have something good and something bad in my solo activity. When I am tired, meeting the members makes me to feel relieved. I meet them for working like this, I can feel like that I ‘m at home.

Jonghyun: I don’t think that the activity with CNBLUE is ‘the work’. So, the members do the ‘work’ in their solo activity and then relax here (=the place in CNBLUE). After relaxing in the place of CNBLUE, we go the ‘work’. I think our members are doing their best even if they are in a hard time. I’m proud of that and that helps me to study of life. I think I’ll do my best with them.

Jungshin: (look at Yonghwa) What is such an expression?! (Laugh)

Jungshin: (Laugh) Sometimes we are asked “What do you think about the other members?” In interview. I really hard to answer it because I got some pressure. We are really familiar, like a family.

Excite: They have existing as if it is common sense, but must have.

Jonghyun: We can say so. It has been 10 years since we met first, and we had been living together from we were young. So, I can say I miss it, in a both way of good and bad.

Minhyuk: We want to keep being such a durable band, and have a cool concert. This is my dream.

Yonghwa: Even if we would have own family someday, I want to have a tour with these members!

Jung Yonghwa
Things that Yonghwa get into…”customize a car. “
I am very concerned about how I will customize my car? I don’t buy a new car. I want to be decorate them not only inside but outside. Of course I won’t to infringe a law (Laugh). A concept? It might be an American style? (Laugh)

Lee Jonghyun
Things that Jonghyun get into…”Philosophy“
I like philosophy since over one year and study it with reading books. I like to read a book too, and also like difficult story. Why do I have to earn the money? Why are we alive? I get basically precepts for my life. I am concerned about the economy too. But even though I’ve talked about them to someone, I am looked at like a stranger. So, I enjoy them by myself (Laugh). I got to know I had been living without thinking. I want to get a knowledge more and more. There are lots of things I have to learn.

Lee Jungshin
Things that Jungshin get into is…”A fashion & A dog“
I’ll appear a TV program about fashion in Korea, I want to learn about a fashion. And I have had Golden Retriever from Aug who was born in June. He is already 34kg, even he is still pappy. When I back to home, he welcomes me. His name is “Shimba”. 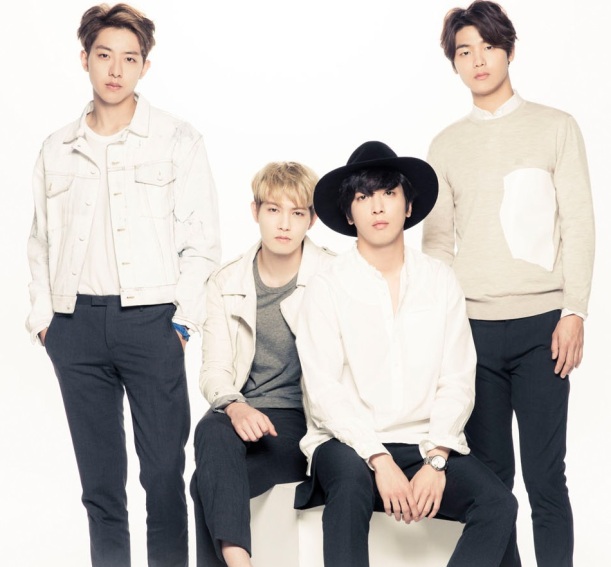 Edited and Posted by Tara Lee