Jonghyun made his solo debut followed on Yonghwa from CNBLUE. The lead song of his solo debut album as a guitarist Jonghyun was SWING by big-band! He doesn’t play a guitar, but he dances in MV. Jonghyun, who tried new music style, told us his ruling passion.

“I’m an adult to admire child. I want to live more free”

26 years old adult who want to be pure. But we close up his view on love.

Yonghwa and Jonghyun. Both of them are vocalist and guitarist of CNBLUE, but they have an opposite temperament about their own music or stage performance. Jonghyun revealed long-awaited his solo debut followed on Yonghwa. Yonghwa composed all of songs for own solo album, but Jonghyun decided ‘SWING’ as a lead song that was composed by overseas composer.

“Because I didn’t think I could make a song like this, I chose this song. I think Swing is gorgeous and has an atmosphere of adult. In fact, there were 2 songs that we want to put as a lead song, and our staff recommended ‘Moonlight Swing’. I just respected their opinion because I stick nothing.”

Jonghyun wrote a prince who escorts a princess perfectly as a main character. And this lyric is very sweet that we never know as a CNBLUE.

He showed his lovey-dovey way with Gong SeungYeon in the Variety TV program in Korea ‘We Got Married’ tho, does he always do like that to a real girlfriend?

“I do like that for my lover. I only act gently in front of the girl I like. You know, the man who is gentle for every woman isn’t real gentleman. Because it is not kind if they make women to confuse, right? I wrote this lyric while I remembered my pure love. I’m living while I even want to be pure now, but I already 26 years old. I’m different from before, ain’t I?

Peter Pan appeared in his lyric. He explained that he wanted the character that everybody know, and Peter Pan is the pronoun who is dreaming.

“I’m an adult, but I pretend to not an adult. Well… I’m a man who wants to be a child. Don’t you think an adult is too much thinking? I suppose that It’s better we live simplier”

“Because I thought that it was going to be a curious album than I composed all songs, I chose songs that not composed by me. There is a Blues that I like in my composed songs. I composed this song 2 years ago for CNBLUE, but members said that it was better to use for a solo. The songs for solo doesn’t have an impression different from the songs for CNBLUE, because I composed them both. It’s same at a base. This is why I chose the songs that were composed by overseas composer. I didn’t have a chance, but I want to make a song with another artist as a collaboration next time.”

“I don’t have a ‘must use’ guitar. I lend my guitar that I used in CNBLUE’s concert mainly to Cha hun of N.Flying. I think it’s better to practice with various types of guitar for the young. Even if it is my precious, I don’t care. A guitar is just a guitar. (Laugh) It doesn’t mean that only an expensive guitar makes a good sound. Most important is a heart more than a good instrument or skill.”

Mini Q and A

*Where and how situation do you want fans to listen to your album?*

From the morning to go to bed.

*Peter Pan appears in the lyric of ‘Moonlight Swing’. What is your most memorable picture book?* 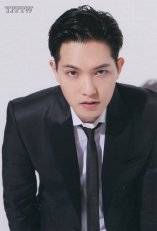 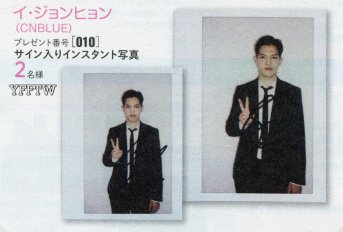 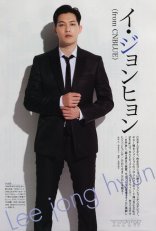